If the lockdown was tough for you, spare a thought for Daniel Podmore. “I haven’t been able to punch anyone in the face for months,” laughed the 32-year-old from Birmingham. “It’s been hell !”

Podmore estimates he’s had around 200 fights on the tough unlicensed boxing circuit – and did think his fighting days were over. “After the last one my missus (Jade) said she didn’t want me fighting anymore,” remembered Podmore, who stands 6ft tall and weighs around 18 stones.

“I agreed, but said that if something big came up, I would have to take it . . . “ The retirement ended when Podmore got a ‘phone call from bare-knuckle boxing boss Jim Freeman. He was looking for four heavyweights to compete in a ‘Prizefighter’ at London’s Indigo at O2 Arena on Saturday, September 12.

“I’m used to fighting twice in a night. It’s nothing new to me. “I remember fighting in Coventry, then jumping in the car and driving to Weston-Super-Mare to fight there a few hours later.”

For years, promoters have known they can dial P for a punch up. Because if they need a heavyweight to fight, Podmore’s is the only number they need. “I used to fight every week,” he said.

“I used to win all my fights and then it got hard to find opponents. “I wanted to fight more often than every couple of months anyway and someone told me: ‘If you go on the road, you can fight every week.’ “So I did that. “I went from having 25 fights to 100 fights in no time. I’ve had nearly 200 fights now.” Not all were boxing matches.

“I remember going to a show in Liverpool for a boxing match and when I got there I was told: ‘Your opponent has pulled out – but you can fight MMA if you like ?’” said Podmore. “I agreed and got a draw. “As I got out of the ring, the promoter said: ‘We need a K1 heavyweight as well . . . ‘ and I said I would do it. “That was a tough night. “As soon as I started losing fights on the road, the ‘phone would ring non stop. I would go to shows and the promoters would tell me: ‘The local lad has sold a lot of tickets, so don’t knock him out.’ “I became a journeyman. “In the end, I got fed up with people thinking they could beat me when I wasn’t really trying to beat them.”

Podmore says a ‘phone call from Freeman turned his career around. “I had just come back from a holiday in Turkey and Jim rang to say: ‘Do you want to fight bare-knuckle tomorrow night ?’” he remembered. “I told him I would think about it, then I rang him back to ask: ‘Who is it and how much are you paying ?’” Former MMA star Josh Burns was the opponent. “I said: ‘Great,’” remembered Podmore, “and I went down there the next night and beat him.

“After that, I was hoping for some big fights. I remember Jim telling me: ‘We haven’t got any other heavyweights’ – but now this has come up. “I think I’ve earned this chance. “I’ve fought in working men’s clubs where the crowd are banging on the ring and your head almost touches the ceiling when you fight. “I’ve seen it all – and now I’m fighting at the O2.” Next door at the O2 Arena, Anthony Joshua has won and defended the world heavyweight championship.

Podmore admits he’s no Joshua, but when he gets in the ring on his big night, he guarantees an honest effort. “Technically, I’m not the best,” he said, “but I’ve got the biggest heart. I will fight until I can’t fight anymore.” 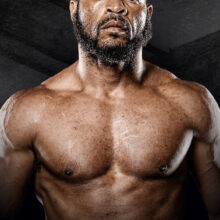 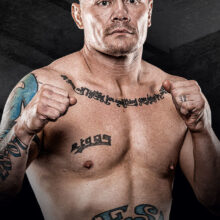